“She had always wanted a brother. And she had one now. Sebastian. It was like always wanting a puppy and being a hellhound instead.”  – Cassandra Clare

“The younger brother must help to pay for the pleasures of the elder.” – Jane Austen

“The highlight of my childhood was making my brother laugh so hard that food came out his nose.” – Garrison Keillor

“I grew up with a younger brother, so I can get pretty rowdy.”– Sarah Wynter

“Our brothers and sisters are there with us from the dawn of our personal stories to the inevitable dusk.” – Susan Scarf Merrell 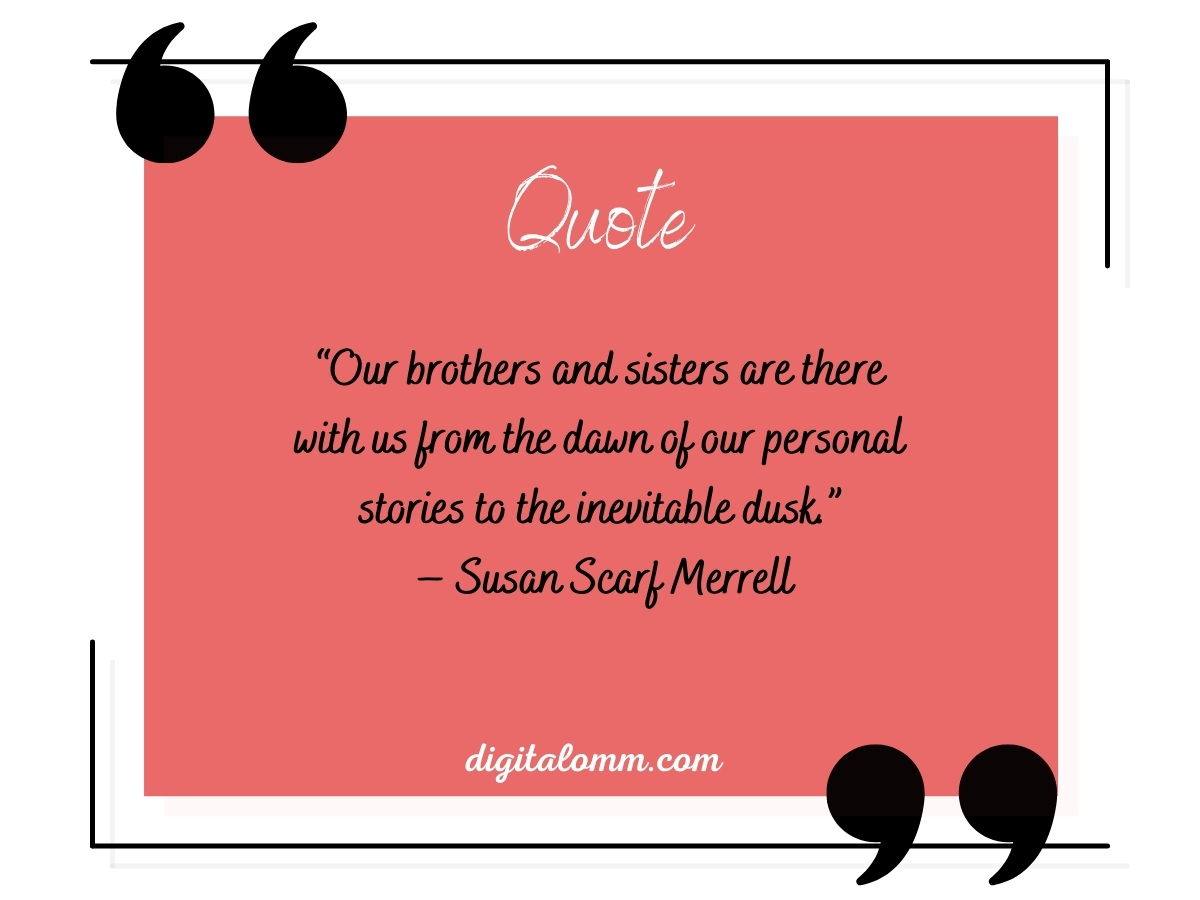 “Help your brother’s boat across, and your own will reach the shore.” – Hindu Proverb

“One can be a brother only in something. Where there is no tie that binds men, men are not united but merely lined up.”– Antoine de Saint-Exupery

“Nothing can stop me from loving my brother.” – Brandy Norwood

“I grew up with six brothers. That’s how I learned to dance – waiting for the bathroom.” – Bob Hope

“All men were made by the Great Spirit Chief. They are all brothers.”– Chief Joseph 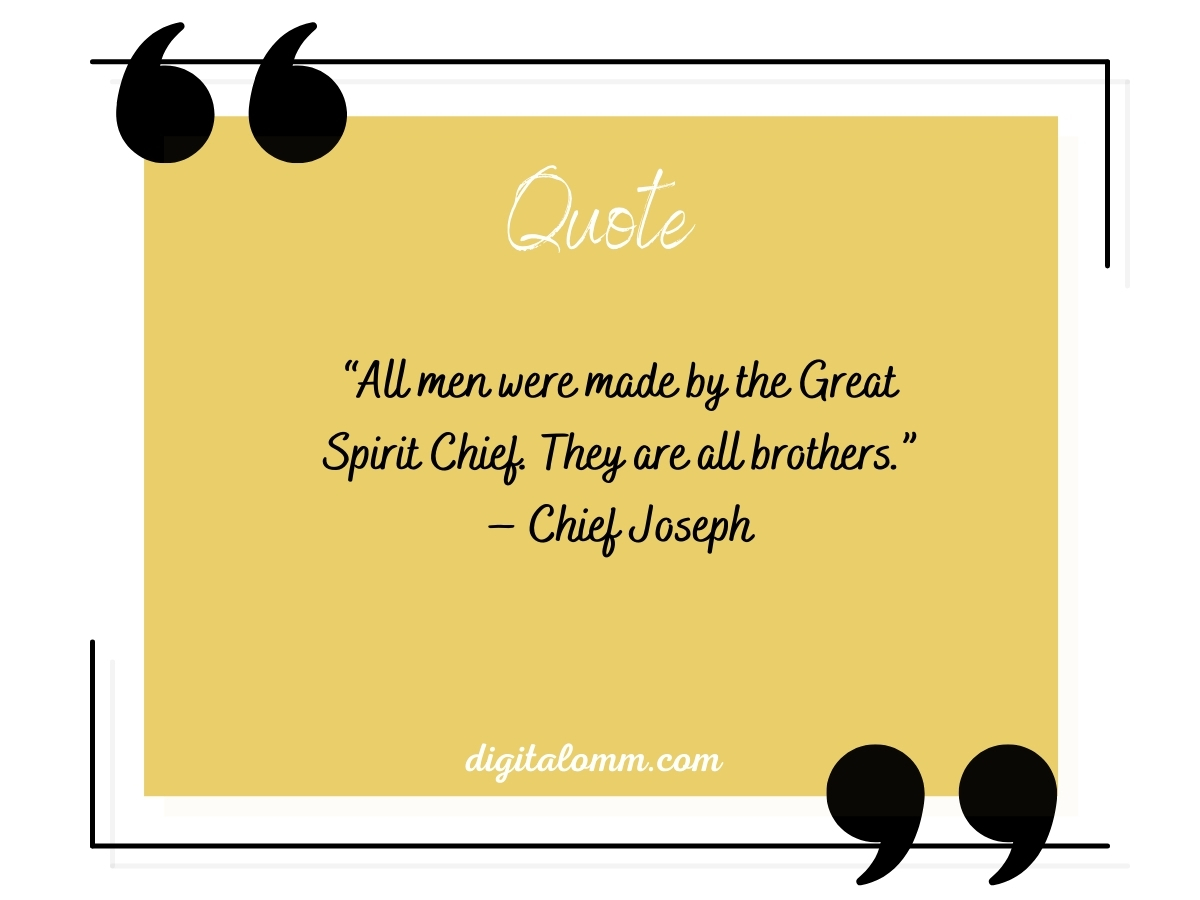 “If you want to know how your girl will treat you after marriage, just listen to her talking to her little brother.”– Sami Levenson

“It snowed last year too: I made a snowman and my brother knocked it down and I knocked my brother down and then we had tea.”– Dylan Thomas

“A sibling may be the keeper of one’s identity, the only person with the keys to one’s unfettered, more fundamental self.”– Marian Sandmaier

“Being pretty on the inside means you don’t hit your brother and you eat all your peas – that’s what my grandma taught me.”– Lord Chesterfield 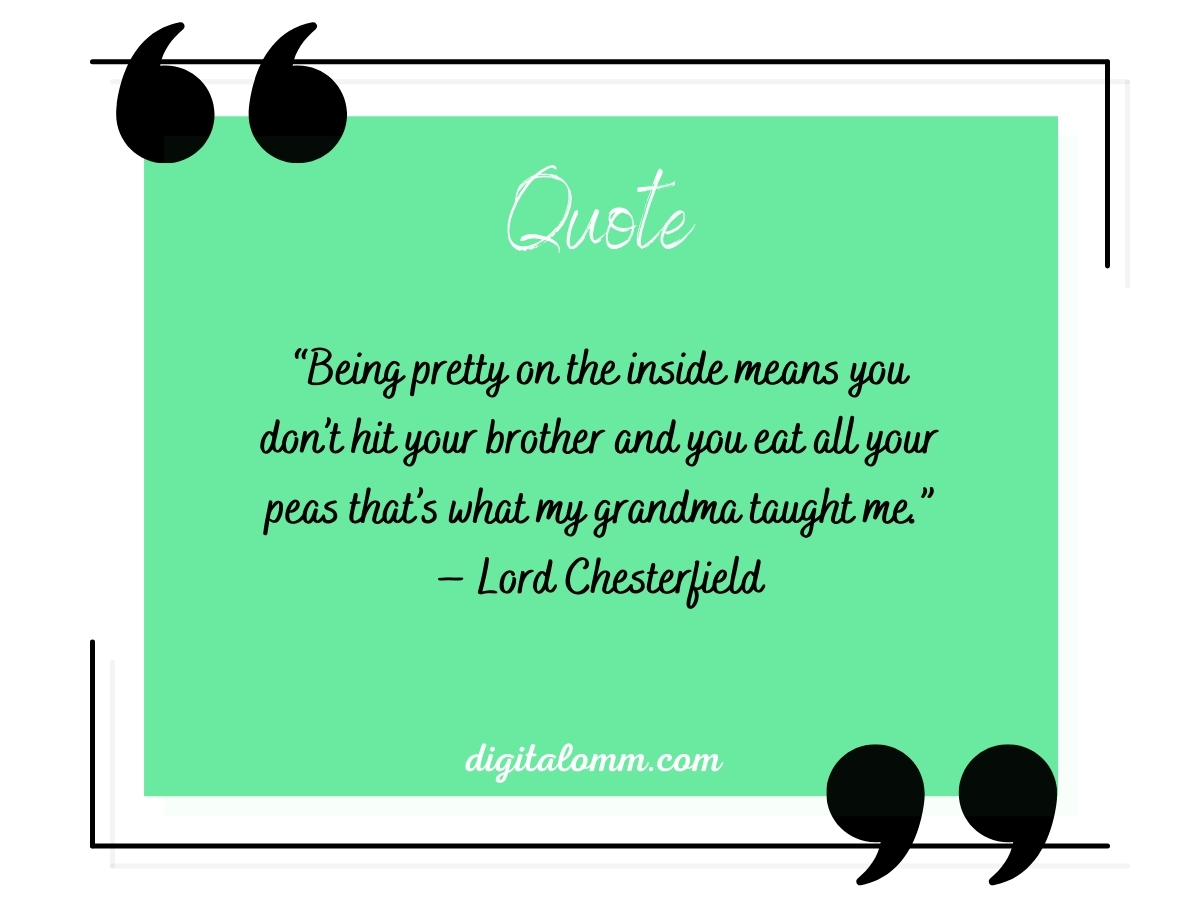 “My father wants me to be like my brother, but I can’t be.”– Robert Mapplethorpe

“I was a tomboy and I didn’t have a bunch of brothers but I always wanted them and so I sort of adopted a few of my great friends to be my brother.”– Olivia Wilde

“If you have a brother or sister, tell them you love them every day – that’s the most beautiful thing. I told my sister how much I loved her every day. That’s the only reason I’m OK right now.” – Amaury Nolasco

“I hated Chris, my brother. I would pull his hair and kick him, until one day my father gave him permission to fight back. I’ll be apologizing to him for the rest of my life.” – Stevie Nicks

“Because I have a brother, I’ll always have a friend.” – Unknown

“I always fight with my brother. This is our way of saying “I love you” – Unknown

“Not always eye to eye, but always heart to heart” – Unknown

“ Because brothers don’t let each other wander in the dark alone.” – Jolene Perry

“ There is a little boy inside the man who is my brother… Oh, how I hated that little boy. And how I love him too.” – Anna Quindlen 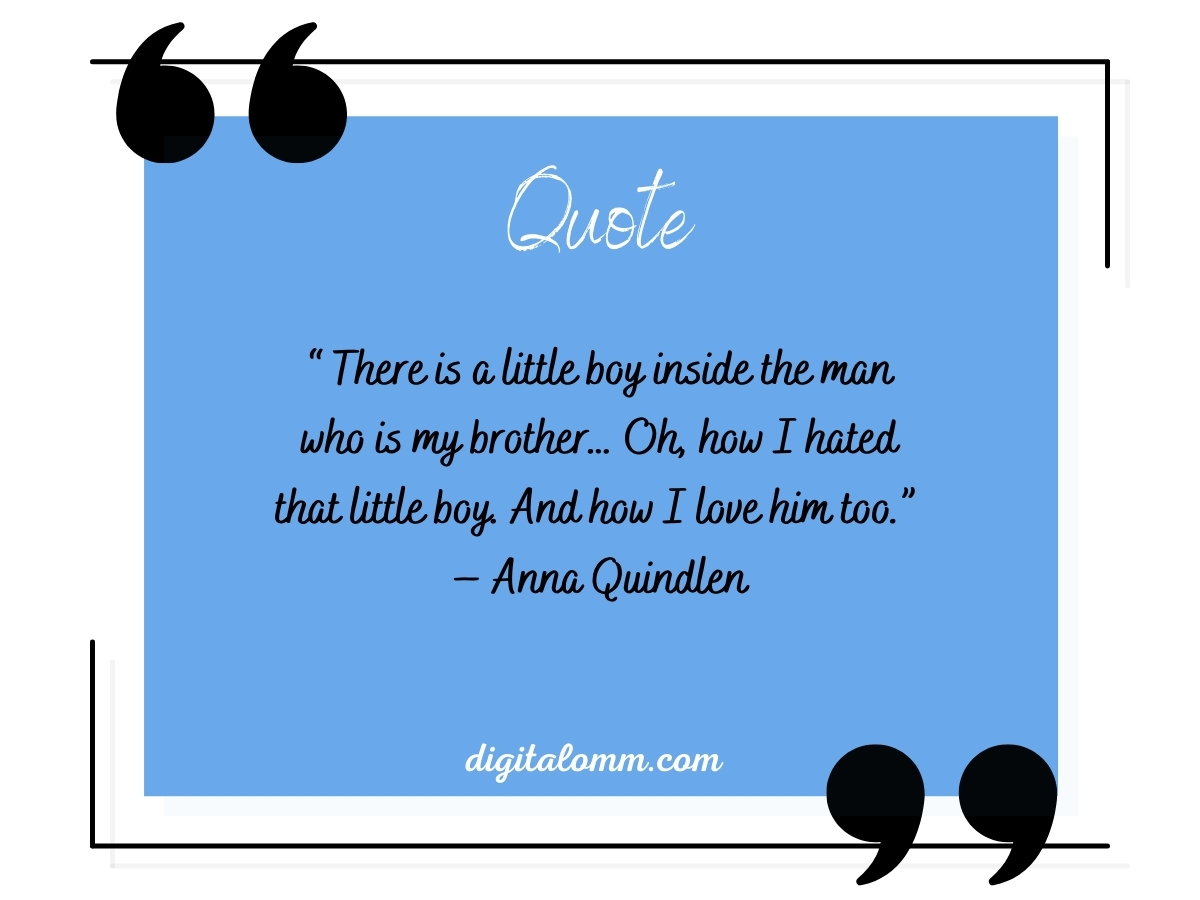 “ Brothers and sisters are as close as hands and feet.” – Vietnamese Proverb

“ Sometimes being a brother is even better than being a superhero.” – Marc Brown

“ I, who have no sisters or brothers, look with some degree of innocent envy on those who may be said to be born to friends.” – James Boswell

“ I don’t believe an accident of birth makes people sisters or brothers. It makes them siblings, gives them mutuality of parentage. Sisterhood and brotherhood is a condition people have to work at. ” – Maya Angelou

“ Mum used to say we were the same soul split in two and walking around on four legs. It seems unnatural being born together and then dying apart.” – Melodie Ramone

“We may look old and wish to the outside world, but to each other, we are still in junior school.” – Charlotte Gray

“I know it’s a cliché, but the whole family is just whacked. I mean, we’re all out of our minds. They’re the funniest, most eccentric bizarre people I’ve ever met, my siblings.” – Dana Carvey

“My big brother still thinks he’s a better singer than me.”– Rod Stewart

“I can’t work with my brother without laughing.” – Dick van Dyke 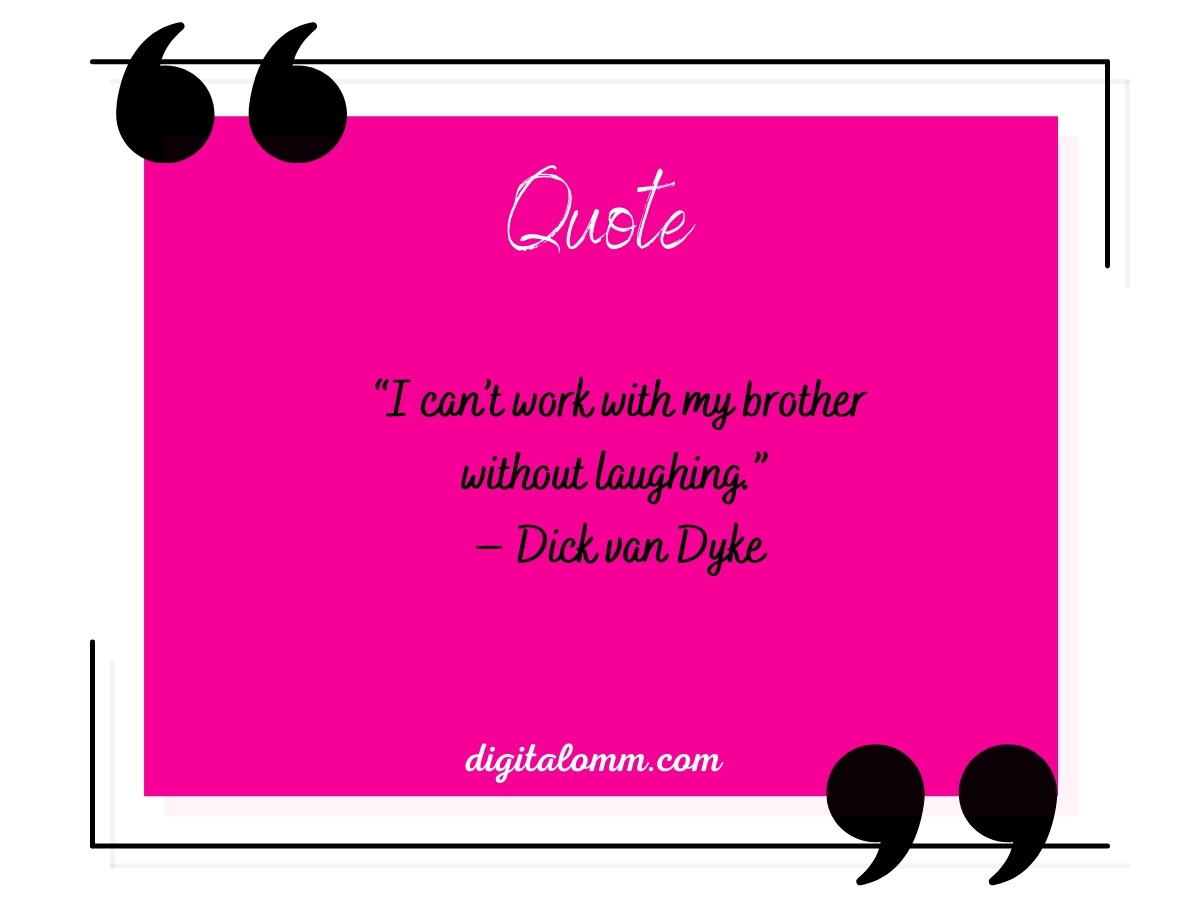 “The family. We are a strange little band of characters trudging through life sharing diseases and toothpaste, coveting one another’s desserts, hiding shampoo, borrowing money, locking each other out of our rooms and trying to figure out the common thread that bound us all together.” – Erma Bombeck

“My brother has the best sister in the world.” – Unknown

“You and I are brother and sister forever. Always remember that if you fall I will pick you up. As soon as I finish laughing.” – Unknown

“Admit it: we always eat and drink slower than our brother or sister so that we can tease them at the end when we’re the only one with any left.” – Unknown

“Brother and sister, together as friends, ready to face whatever life sends. Joy and laughter or tears and strife, holding hands tightly as we dance through life.” – Suzie Huitt

“Growing up, I had a very normal relationship with my brother and sister. But, over time, they became my best friends, and now I hang out with them all the time. I’m very close with them.” – Logan Lerman

“We didn’t even realize we were making memories, we just knew we were having fun.” – Winnie the Pooh

“Brothers are playmates in the beginning and best friends for life.” – Anonymous 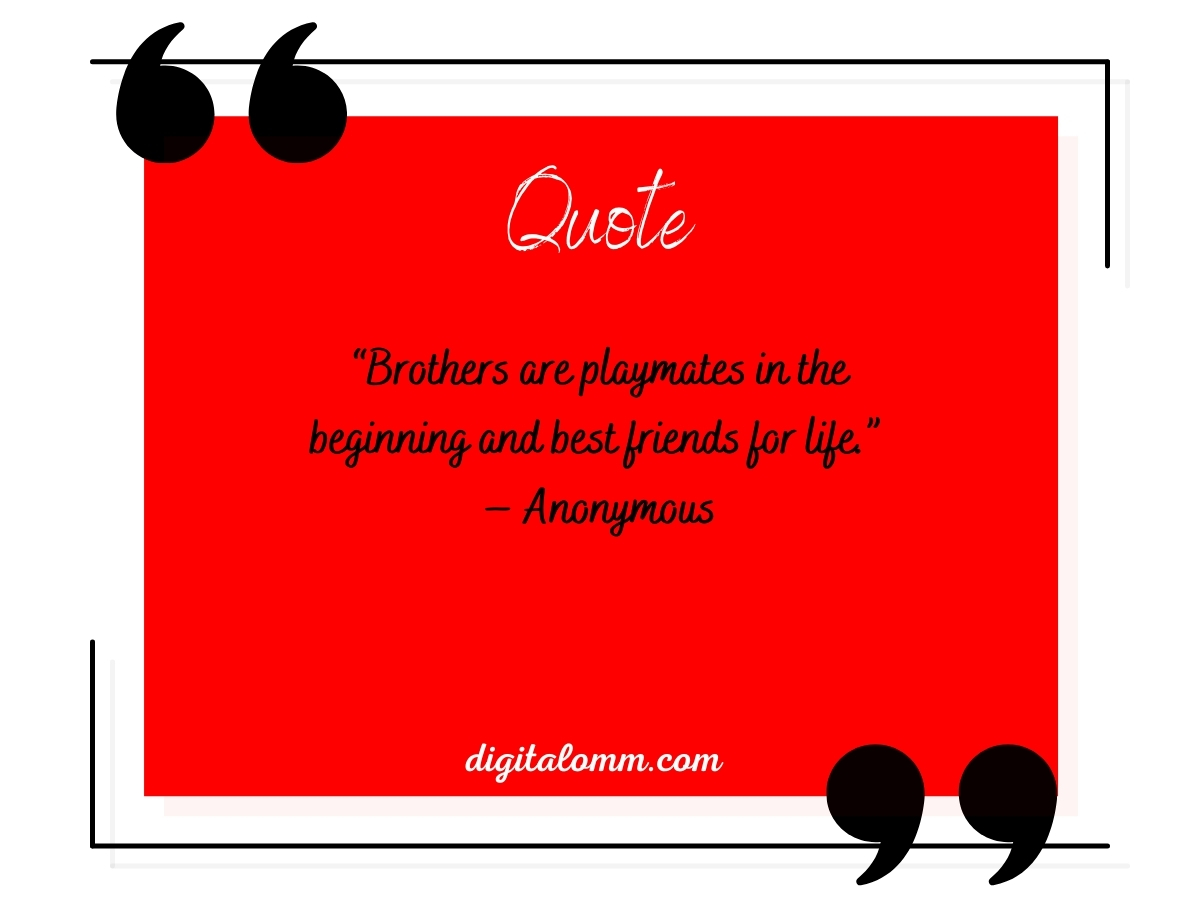 “Ohana means family and family means nobody gets left behind or forgotten.” – Lilo and Stitch

“The best thing about having four big brothers is you always have someone to do something for you.” — Chloe Moretz

“Being brother and sister means being there for each other.” – Unknown

“Even though we grew up and went in separate directions, I want you to know I’ll always take your side no matter what.” – Unknown

“Children of the same family, the same blood, with the same first associations and habits, have some means of enjoyment in their power, which no subsequent connections can supply.”  – Jane Austen

“Love fails, only when we fail to love.”― J. Franklin

“I’m mastering to believe the adventure of our broken relationship even if I no longer recognize it.”

“We all make errors in life, and I’ve made mine with the aid of deciding on you to accept as real with my heart.”

“With you, I have learned a way to love you but alas no longer how to stop loving you.” 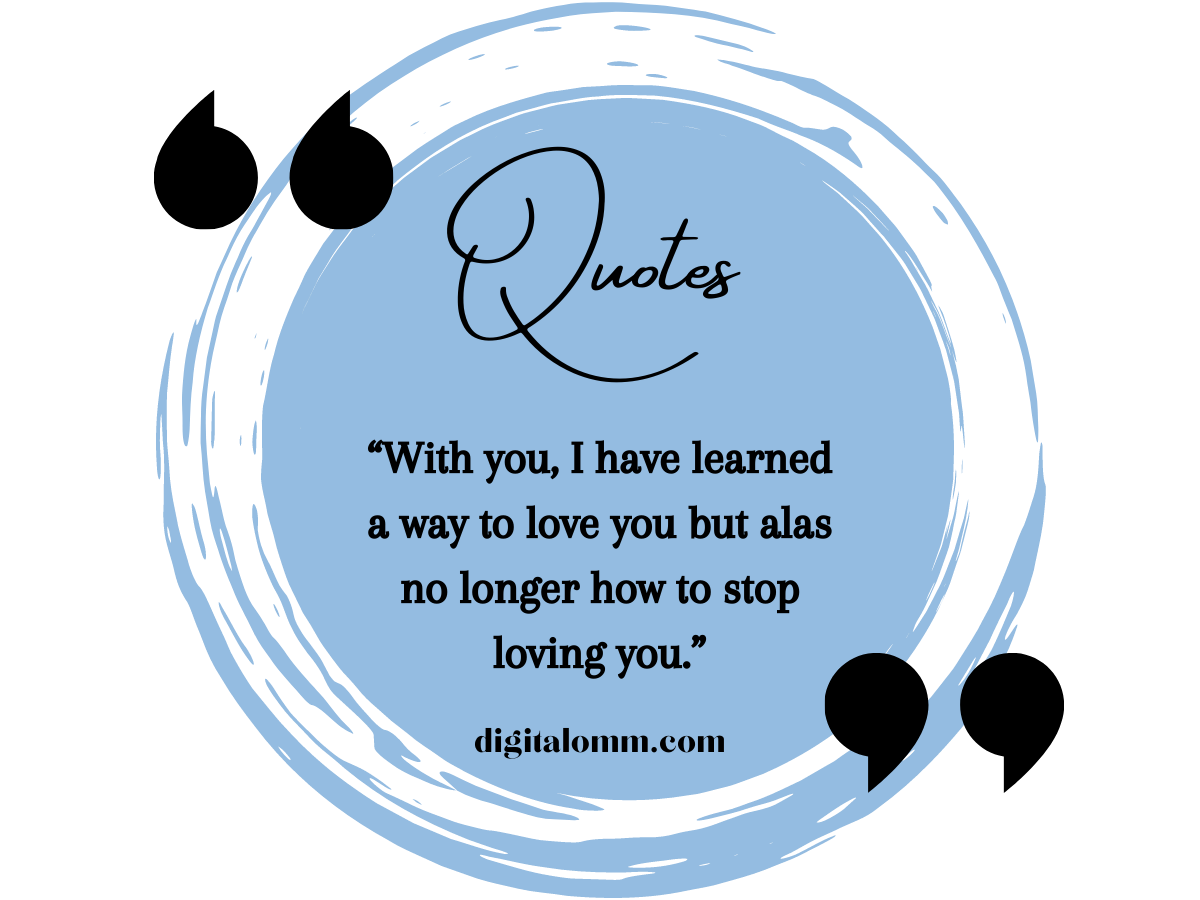 “If you didn’t succeed, it’s just as important to keep in mind that there has never been a success story without failure and lessons along the way.”

“Love abandoned you so that someone special will find you and stay in your heart forever.”

“I can’t sleep due to the fact I don’t want to dream of you anymore.”

“I’ve counted the steps which you took when you walked away and said goodbye.” “From time to time, humans ought to cry out all their tears, to make room for a coronary heart complete of smiles.”

“It is no fun to fail, but you must pick yourself up and get back in the race. The only way you can grow is to challenge yourself beyond your present circumstances.”

“The most painful thing is that I trusted you too much and never thought that you would hurt me this much.”

“I wish I were a child again because skinned knees are easier to fix than a broken heart.”

“The deepest people are the ones who’ve been hurt the most.“

“Some things a heart won’t listen to, I’m still holding out for you.”

“Just because we don’t talk doesn’t mean I don’t think about you.”

“I wish I were a little girl again because skinned knees are easier to fix than a broken heart.”

“You took away the pieces of my heart when you left.”

“The hardest part about loving someone is watching that person love another person.” 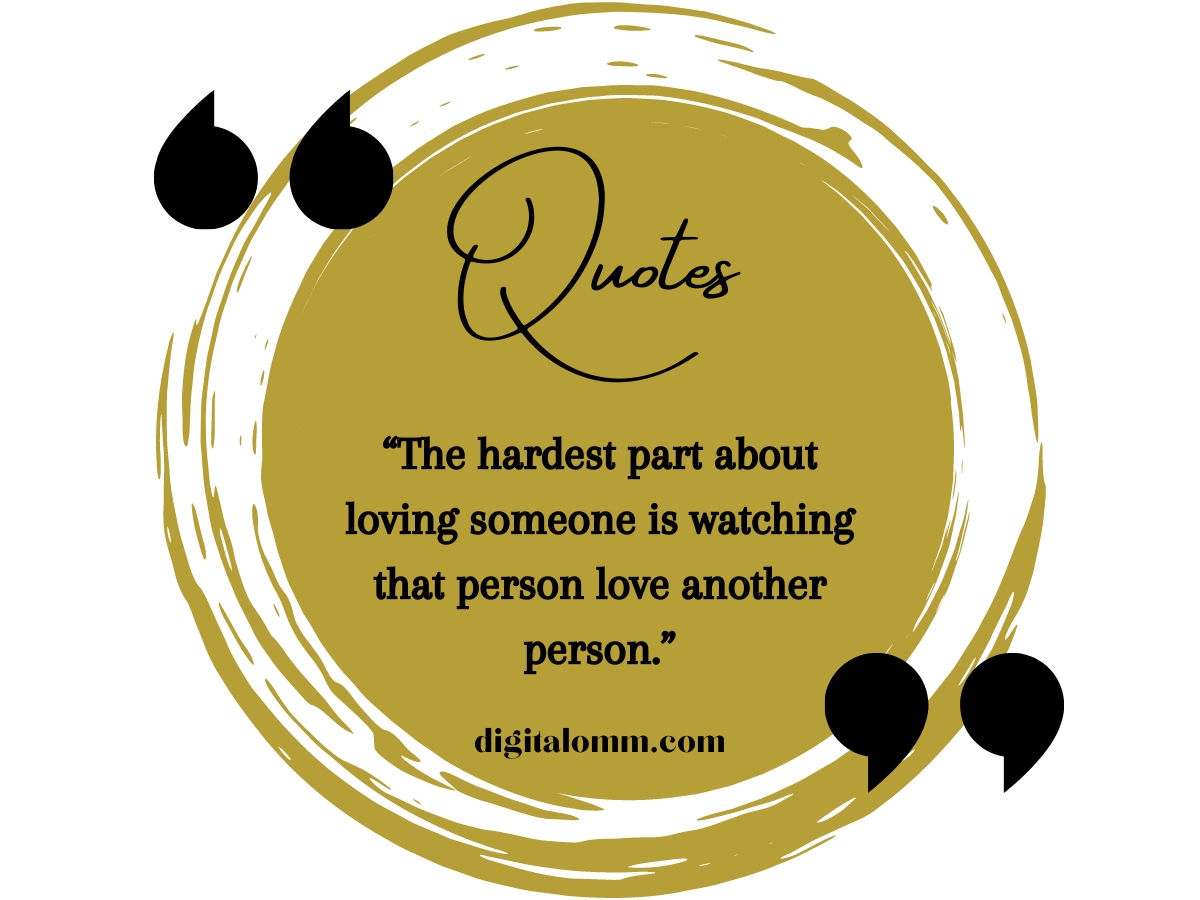 “From strangers to lovers and now we are lovers back to total strangers.“

“The most painful memory, when I walked away & you let me go.“

“I loved someone but sometimes love just isn’t enough.“

“The ache you gave me is a reminder that only a fool will play together with his queen’s coronary heart.”

“It’s miles higher to have loved and misplaced than by no means to have cherished at all.”

Love Failure Quotes for Her

“Going to preserve all secrets to myself, considering that a few human beings I can’t believe.”

“Said the proper words and left me with the worst emotions.”

“It’s painful to allow you to go, but it’s far more difficult to hold on to you.”

“I used to be afraid to lose you. But you gave me no choice, however, to live without you.”

“Love is heaven but it can hurt like hell.” 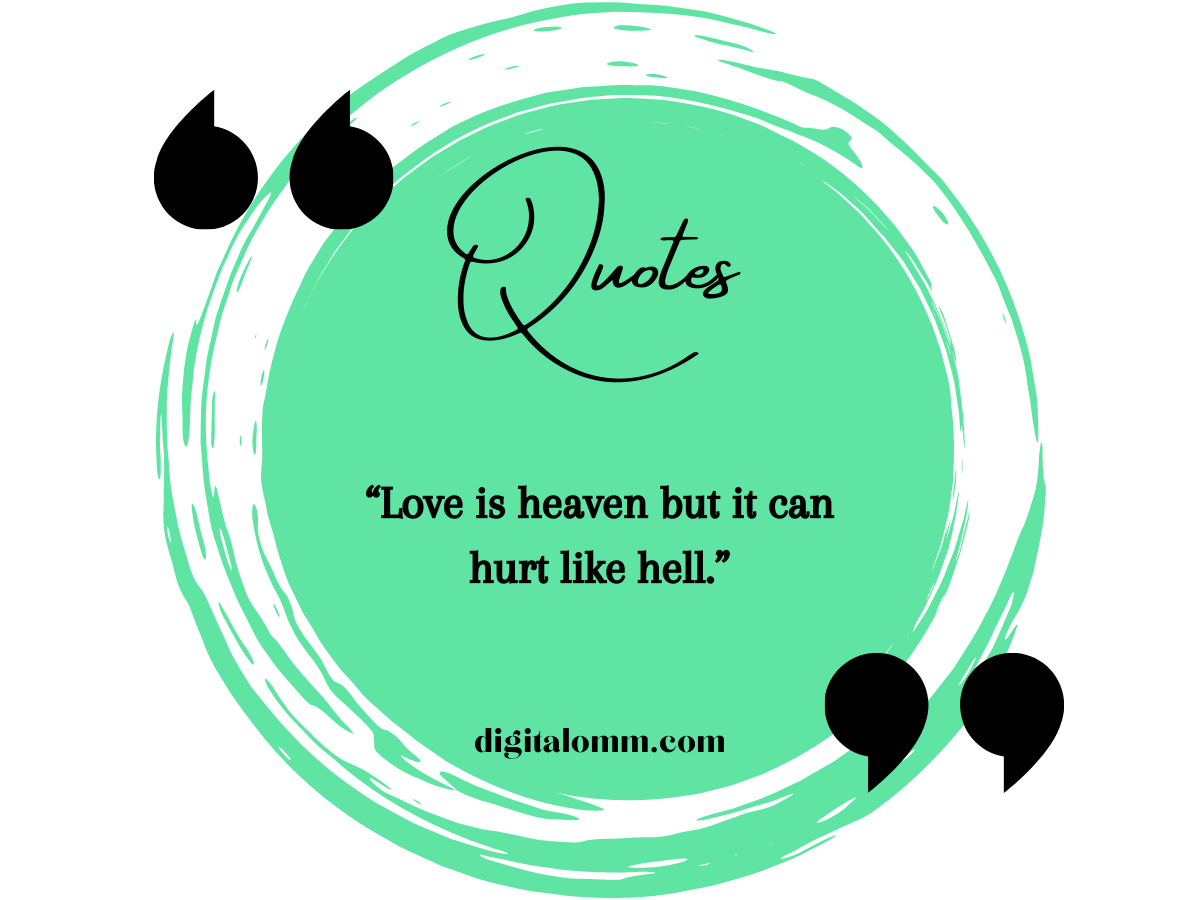 “I have counted the steps that you took when you walked away and said goodbye.”

“The successful person makes a habit of doing what the failing person doesn’t like to do.”

“When you see your love leave, don’t make his path slippery with your tears. Make the transition easy so that both can start afresh.”

“Wake me up when my heart is no longer broken.”

“You never fail in love because your best lovers (MOM and DAD) are always with you..”

“Never love a person who doesn’t care for you and always threatens to leave you alone in between.”

“I gave you my love, and you gave me heartaches on my way back.”

“Every moment of beautiful life becomes heartbroken with the presence of an egoist person.”

“When This IS Over, Remember, I didn’t WALK Away, You Pushed Me Away..” 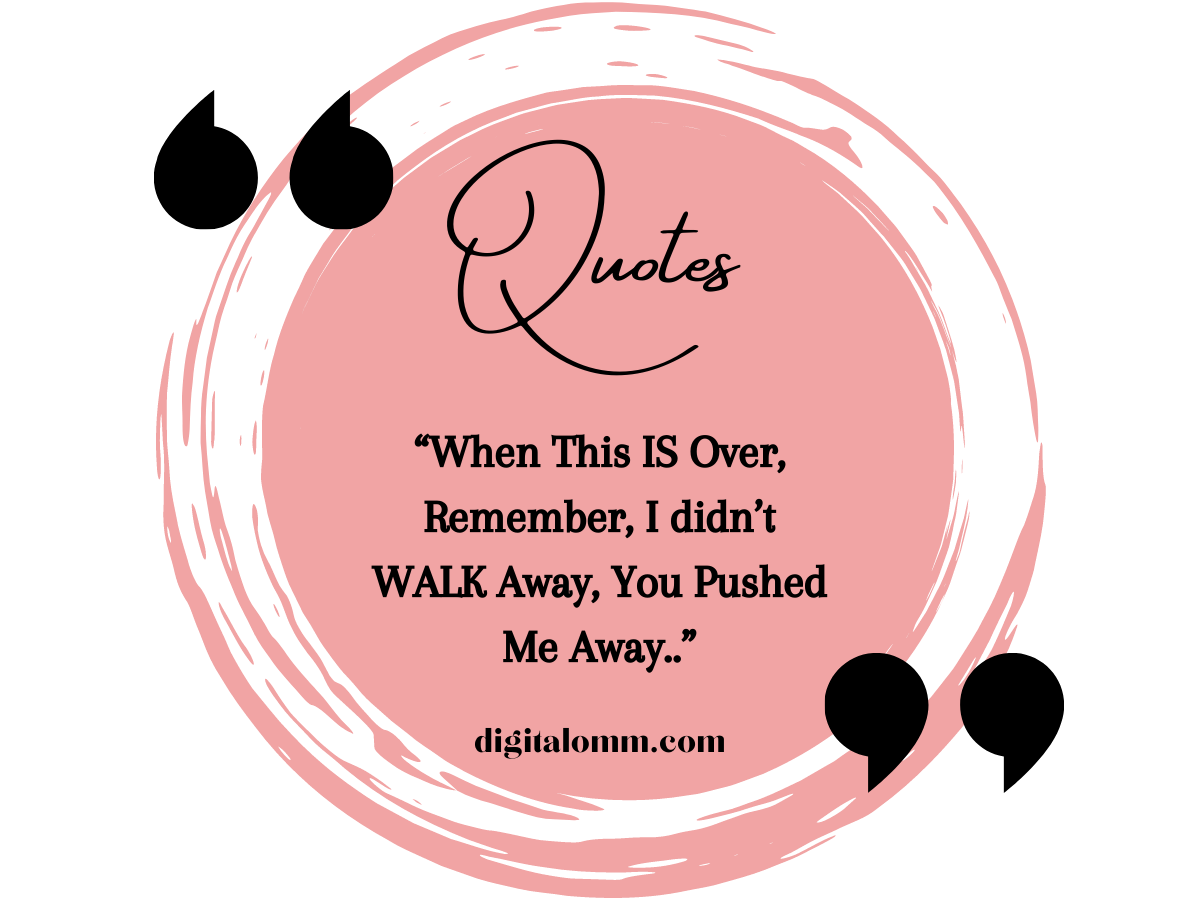 “Everybody knows that something’s wrong but nobody knows what’s going on.”

“Letting you pass is like the day past. I’m able to go no longer return.”

“My feelings for you were genuine, but somehow, it could not touch your heart.”

“There is no point in crying, the tears won’t bring you back to me.” 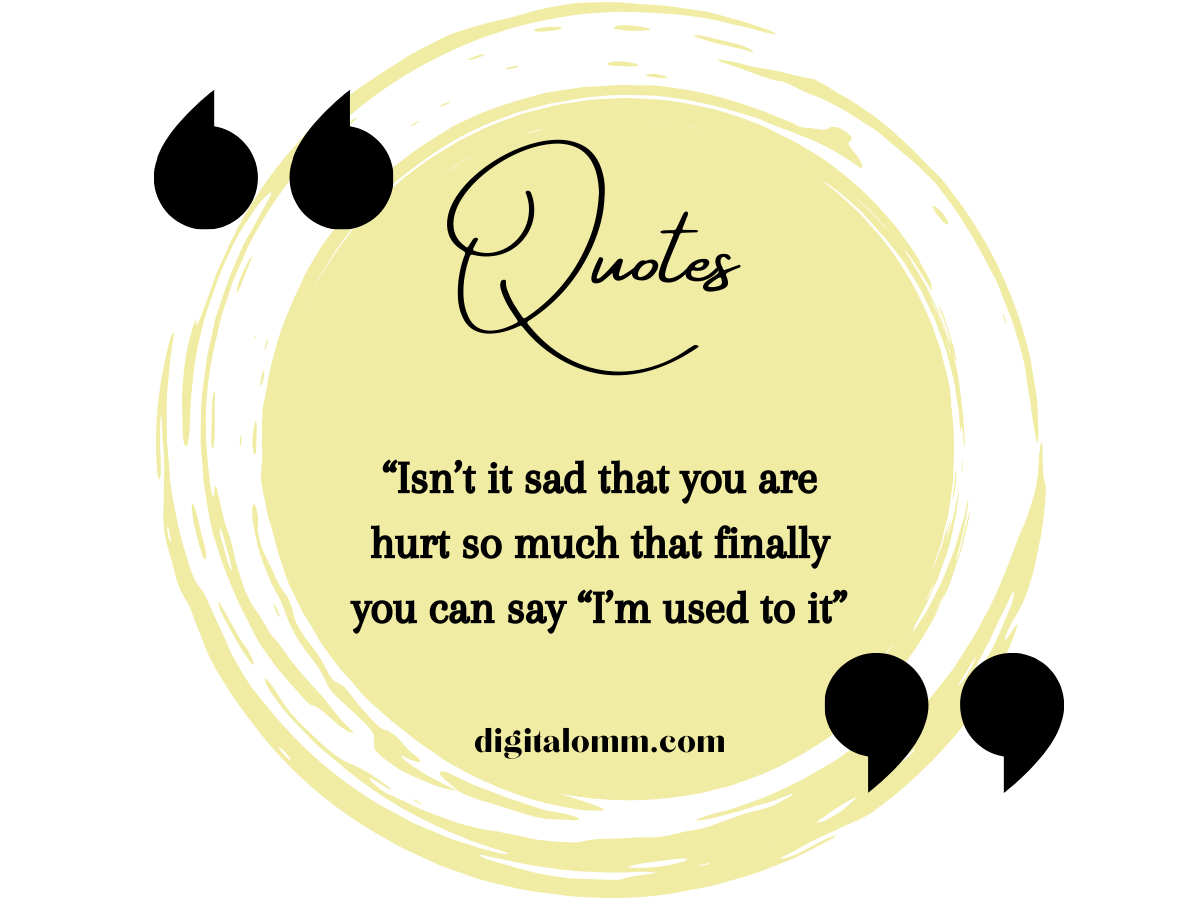 “One Of The Hardest Things To Do. Is To Delete Old Messages That Once Meant A Lot To You.”

“I’m tired of everyone telling me about their special person when I desperately want one of my own.”

“There’s greatness in doing something you hate for the sake of a person you love.”

“Tears come in my eyes when you go away. You will see a smile on my face when you are with me.”

“It isn’t the bad memories that make you sad, but the best ones that you can’t bring back.”