“Better to remain silent and be thought a fool than to speak out and remove all doubt.”– Abraham Lincoln

“If I were two-faced, would I be wearing this one?”– Abraham Lincoln

“The best thing about the future is that it comes one day at a time.”– Abraham Lincoln

“The only mystery in life is why the kamikaze pilots wore helmets.”– Al McGuire

“Light travels faster than sound. This is why some people appear bright until you hear them speak.”– Alan Dundes

“Nobody realizes that some people expend tremendous energy merely to be normal.”– Albert Camus

“Life is short, smile while you still have teeth.”

“A balanced diet means a cupcake in each hand.”

“Maybe you should eat some makeup so you can be pretty on the inside too.”

“The difference between stupidity and genius is that genius has its limits.”– Albert Einstein

“All the things I really like to do are either immoral, illegal or fattening.”– Alexander Woollcott

Also Read: Cute and Romantic Love Quotes for Her

“It would be nice to spend billions on schools and roads, but right now that money is desperately needed for political ads.”– Andy Borowitz

“The average dog is a nicer person than the average person.”– Andy Rooney

“At every party, there are two kinds of people – those who want to go home and those who don’t. The trouble is, they are usually married to each other.”– Ann Landers

“If you want your children to listen, try talking softly to someone else.”– Ann Landers

“My opinions may have changed, but not the fact that I’m right.”– Ashleigh Brilliant

“To be sure of hitting the target, shoot first, and call whatever you hit the target.”– Ashleigh Brilliant

“Trouble knocked at the door, but, hearing laughter, hurried away.”– Benjamin Franklin

“I’m not shy, I’m holding back my awesomeness so I don’t intimidate you.”

“Sorry for the mean, awful, accurate things I said.”

“Your life can’t fall apart if you never had it together.”

“Wine is constant proof that God loves us and loves to see us happy.”– Benjamin Franklin

“Have you noticed that all the people in favor of birth control are already born?”– Benny Hill

“Be who you are and say what you feel, because those who mind don’t matter and those who matter don’t mind.”– Bernard Baruch

“Most people would sooner die than think in fact, they do so.”– Bertrand Russell

“The world is full of magical things patiently waiting for our wits to grow sharper.”– Bertrand Russell

“Facebook just sounds like a drag, in my day seeing pictures of peoples vacations was considered a punishment.”– Betty White

“Everything that used to be a sin is now a disease.”– Bill Maher

“If there is anything the nonconformist hates worse than a conformist, it’s another nonconformist who doesn’t conform to the prevailing standard of nonconformity.”– Bill Vaughan

“Money won’t buy happiness, but it will pay the salaries of large research staff to study the problem.”– Bill Vaughan

“The surest sign that intelligent life exists elsewhere in the universe is that it has never tried to contact us.”– Bill Watterson

“Before you judge a man, walk a mile in his shoes. After that who cares?… He’s a mile away and you’ve got his shoes!”– Billy Connolly

“I’ve always wanted to go to Switzerland to see what the army does with those wee red knives.”– Billy Connolly

“People say nothing is impossible, but I do nothing every day.”

“A bank is a place that will lend you money if you can prove that you don’t need it.”

“If you think nobody cares if you’re alive, try missing a couple of payments.”

“Going to church doesn’t make you a Christian any more than going to a garage makes you an automobile.”– Billy Sunday

“If you’re going to tell people the truth, be funny or they’ll kill you.”– Billy Wilder

“A bank is a place that will lend you money if you can prove that you don’t need it.”– Bob Hope

“Inside me, there’s a thin person struggling to get out, but I can usually sedate him with four or five cupcakes.”– Bob Thaves

“We never really grow up, we only learn how to act in public.”– Bryan White

“As a child, my family’s menu consisted of two choices: take it or leave it.”– Buddy Hackett

“My favorite machine at the gym is the vending machine.”– Caroline Rhea

“All right everyone, line up alphabetically according to your height.”– Casey Stengel

“He who laughs last didn’t get the joke.”– Charles de Gaulle

“An alternative to love is not hate but patience”. – Santosh Kalwar

“Good relationships don’t just happen. They take time, patience, and two people who truly want to be together.”

“Sometimes what a person needs is not a brilliant mind that speaks, but a patient hearts that listens.”

“Love cannot be measured by how long you wait, It’s about how well you understand why you are waiting.” 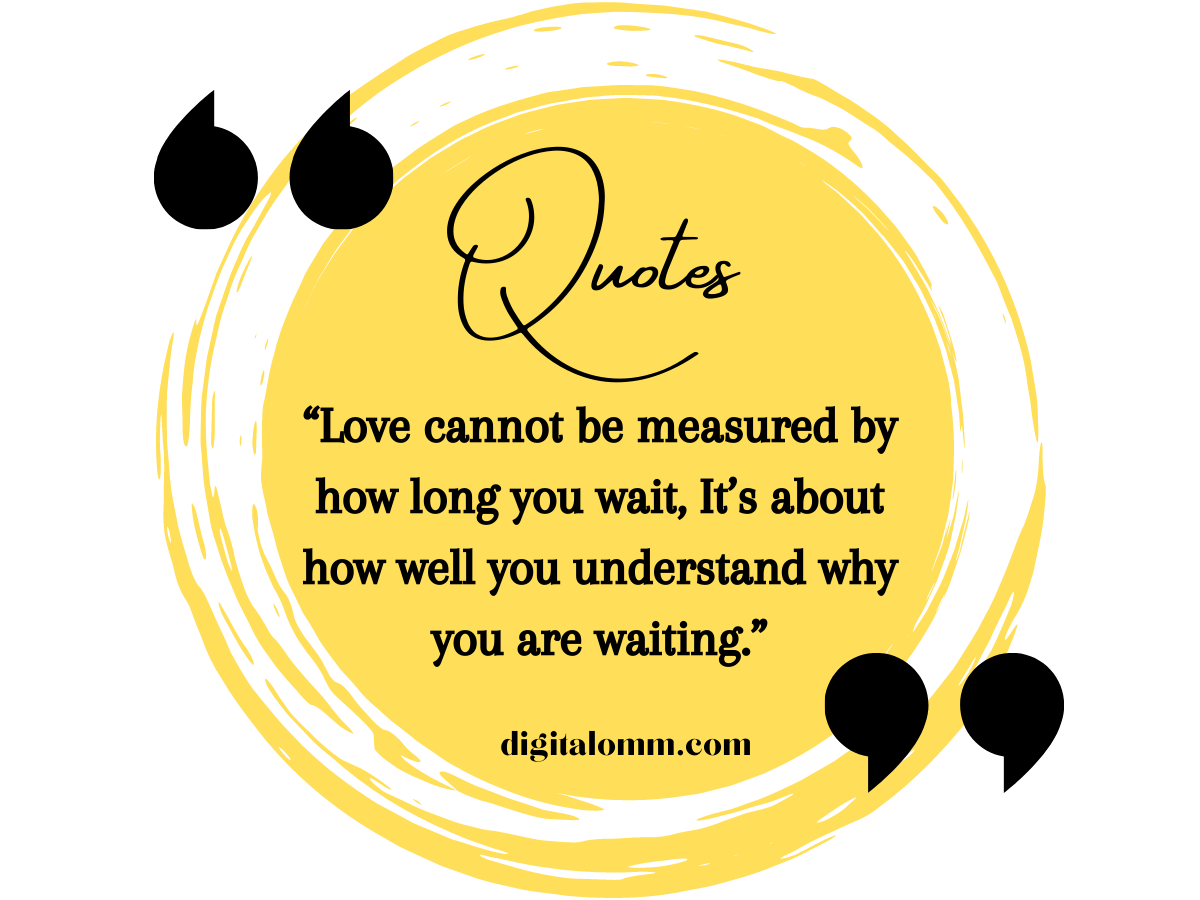 “I think a part of me will always be waiting for you.”

“Wait for the one who would do anything to be your everything.”

“Nature never rushes, yet everything gets done”. – Lao Tzu

“Don’t try to rush things: for the cup to run over, it must first be filled”.

“Patience is also a form of action.” Anonymous 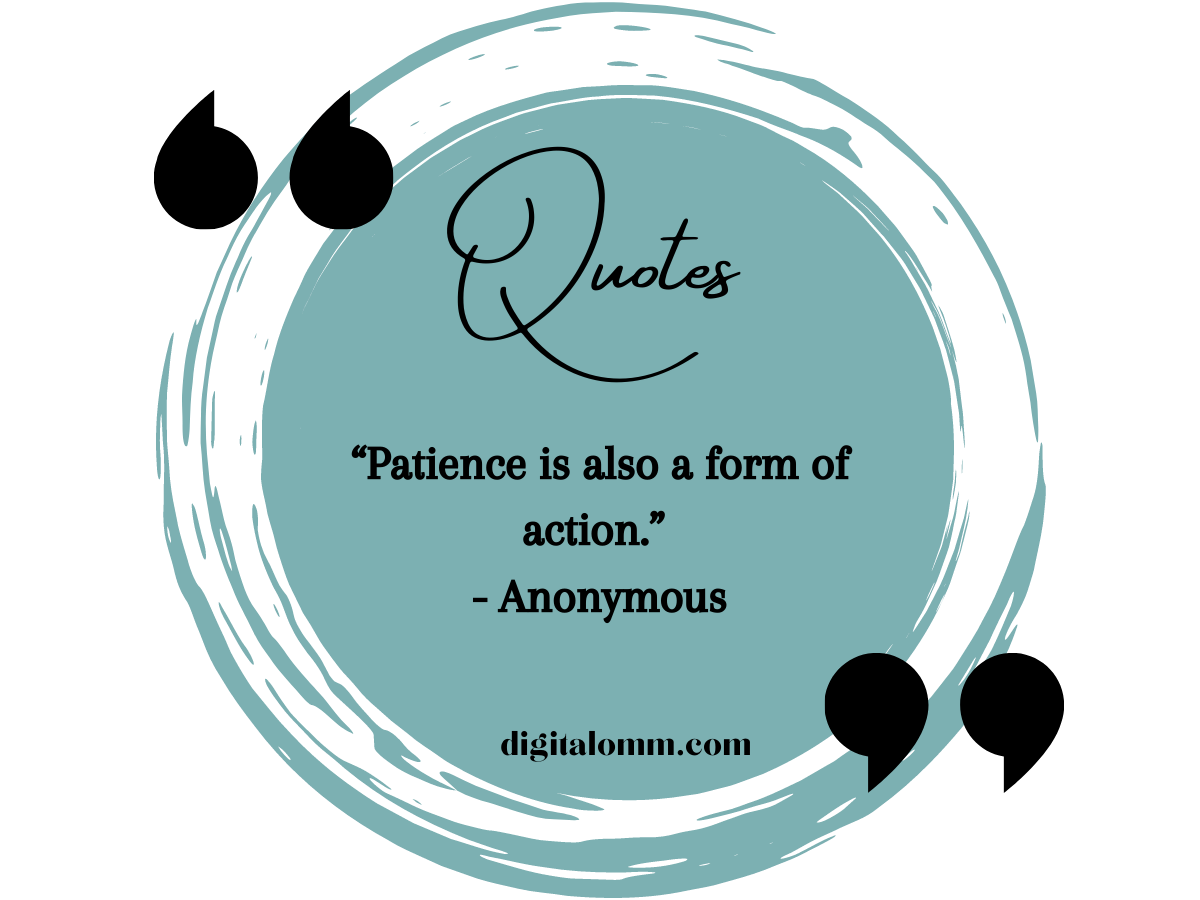 “Patience is the calm acceptance that things can happen in a different order than the one you have in your mind.” – David G. Allen

“Patience is a key element of success.” – Bill Gates

Quotes About Being Patience

“Only those who have patience to do simple things perfectly ever acquire the skill to do difficult things easily.” – James J. Corbett

“Rivers know this: there is no hurry. We shall get there some day.” – A. Milne

“And sure enough, even waiting will end…if you can just wait long enough”. – William Faulkner

“The key to everything is patience. You get the chicken by hatching the egg, not by smashing it”. – Arnold H. Glasgow

“The strongest of all warriors are these two Time and Patience”. – Leo Tolstoy 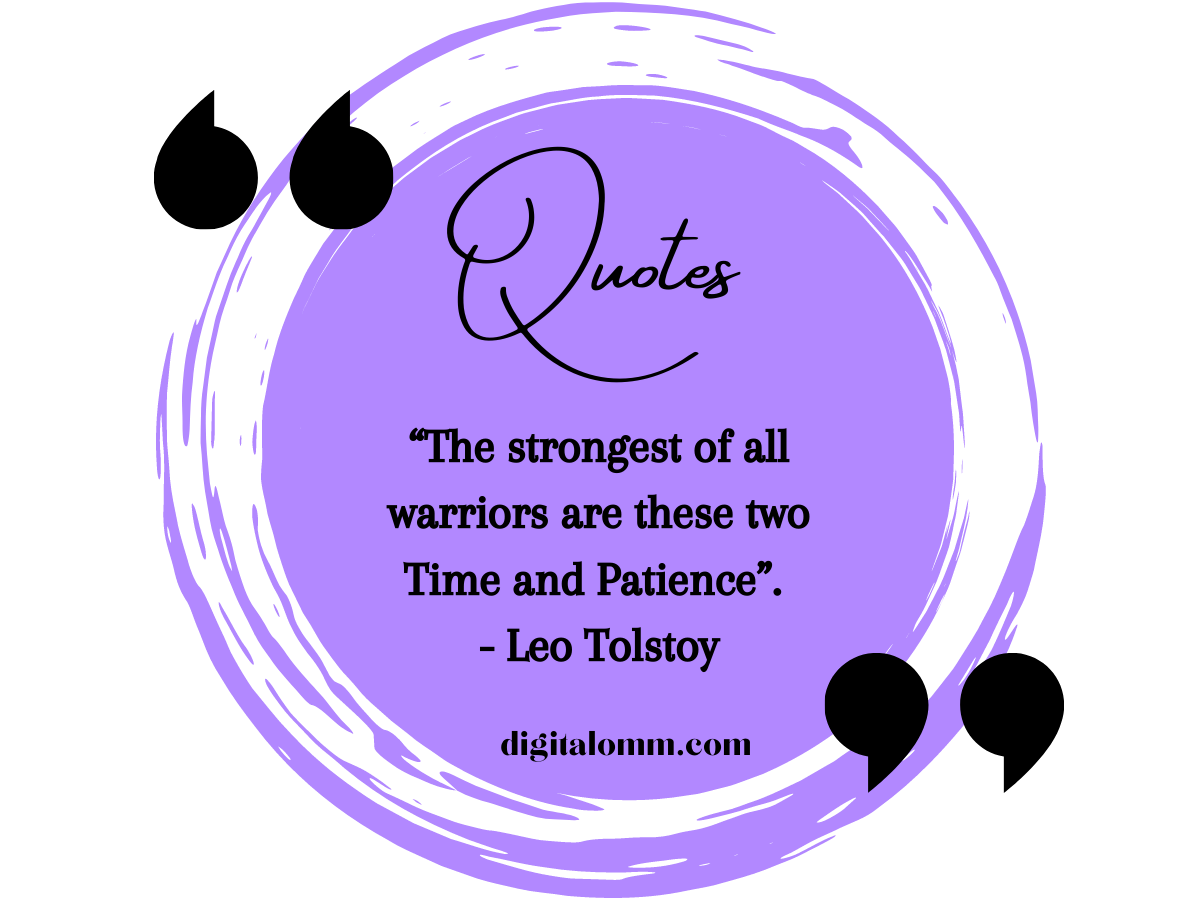 “There is something good in all seeming failures. You are not to see that now. Time will reveal it. Be patient”. Sivananda Saraswati

“Teach us, O Lord, the discipline of patience, for to wait is often harder than to work”. Peter Marshall

“Change is slow and gradual. It requires hard work, a bit of luck, a fair amount of self-sacrifice, and a lot of patience”. Robert Greene

“Whoever is out of patience is out of possession of their soul”. Francis Bacon

“Have patience with all things but first of all with yourself”. Francis de Sales

“Our patience will achieve more than our force.” Edmund Burke

“Patience is when you’re supposed to get mad, but you choose to understand.” Anonymous

“Knowing trees, I came to realize, understand and appreciate the act of patience”. – Ogwo David Emenike

“So much in a revolution is nothing but waiting”. – Sinclair Lewis 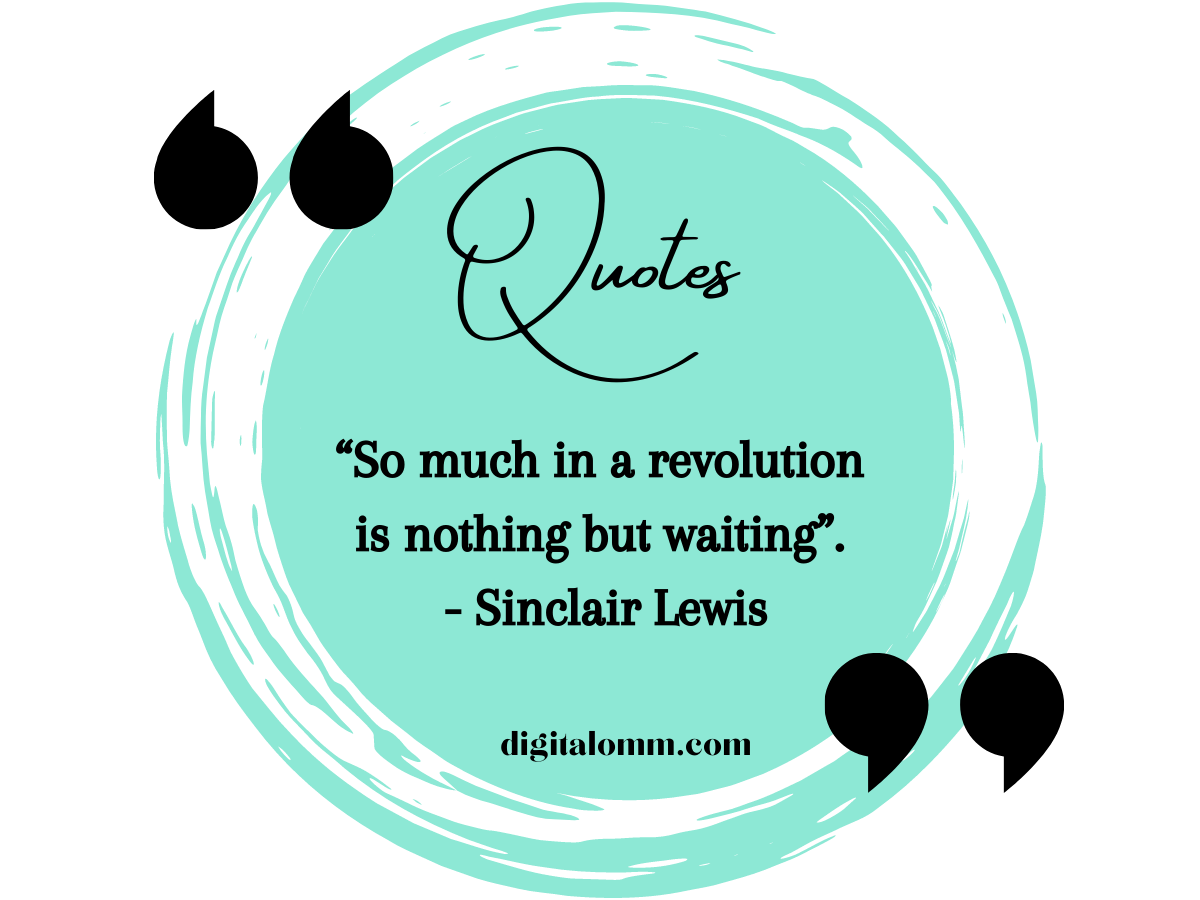 “Learning patience can be a difficult experience, but once conquered, you will find life is easier”. – Catherine Pulsifer

“Patience is when you’re supposed to be mad but you choose to understand.”

“There is no error greater than hatred. And nothing mightier than patience. So I strive in every way to learn patience.” – Buddha.

“Patience is the key, because when the right time comes, it will be very beautiful and totally worth the wait.”

“When you encounter various trials, big or small, be full of joy. They’re opportunities to learn patience.” Scott Curran


“Our impatience of miles, when we are in hurry; but it is still best that a mile should have seventeen hundred and sixty yards.” Ralph Waldo Emerson

“But ‘not giving up’ requires a certain level of patience, of hours and hours, and sometimes days or weeks, months or years of trying and perfecting.” V. Noot

“Sometimes things aren’t clear right away. That’s where you need to be patient and persevere and see where things lead.” – Mary Pierce

“Patience is the best remedy for every problem”. – Plautus 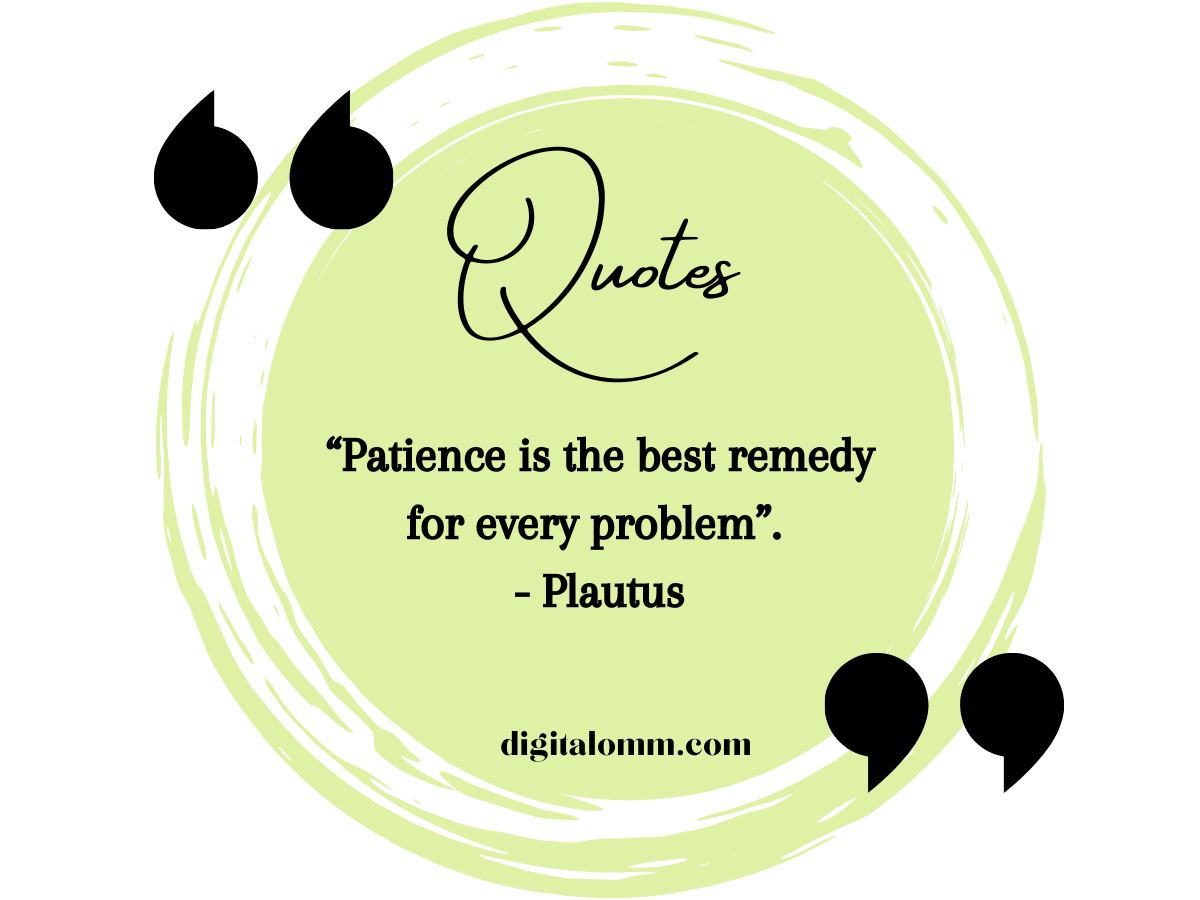 “Knowing trees, I understand the meaning of patience. Knowing grass, I can appreciate persistence”. – Hal Borland

“With love and patience, nothing is impossible.” – Daisaku Ikeda

“He that can have patience can have what he will.” – Benjamin Franklin

“To lose patience is to lose the battle.” – Mahatma Gandhi